April 2021 pandemic highlights and ramblings (a newsletter, in blog form)

Posted on April 30, 2021 | Comments Off on April 2021 pandemic highlights and ramblings (a newsletter, in blog form)

The pandemic is still going on and so is this! Here’s my latest not-a-newsletter of highlights and ramblings and thingamabobs for this April.

Pandemic:The pandemic is a story of extremes this month. Some countries, like the US and the UK and Israel, are seemingly coming to the end of it. Meanwhile countries like India are burning up with cases and death. It’s terrible to see. For countries like the US and UK, being able to produce their own vaccines made a big difference. But it wasn’t the only difference (Ahem, going from Trump to Biden). For a deeper dive on just one country, here’s a good piece on how Israel was so successful

In Canada we model the world in some ways. For parts of Canada life is relatively normal and aims to stay that way. (I’m look at you up North and out East.) Then there is Ontario, where I am, which seems to have suffered a collapse in provincial leadership. The provincial government recently issued edicts to the province, only to have everyone from the police to the public health units to the people either ignore it or rally against it. Some newspapers are saying that’s the end for the premier.

I have some sympathy for the government’s plight. On one hand you have  hospitals halting non-emergency surgeries as COVID-19 patients fill ICUs, which is terrifying. On the other hand, you have businesses everywhere saying that they’re at risk of losing everything and need help. What you need is strong leadership at this point, but as the Globe and many other argued, we aren’t getting it. We have a panicked leadership seemingly refusing to do anything other than hope for the vaccines to rescue them for their inability to do more.

I’m too discouraged to say more. I’ll let the Toronto Star have the last word:  A 278-word timeline of Ontario’s COVID-19 response | The Star

Individually, the New York Times says we have all hit the wall and we are languishing. I agree. Some of us are getting vaccines, but the unequal distribution can make us feel guilty. Lots of difficult feeling to deal with. We just have to take breaks when we can and forge on.

Meanwhile for something completely different, pandemic-wise, check out this: Honeywell and rapper Will.i.am just debuted a futuristic face-mask with built-in wireless earphones at Yanko Design.

Newsletters:last month I said newsletters are “still a thing”. What an understatement. If anything, they are now a Big Thing. So big that the New York Times is getting ready to go toe to toe with Substack.

It makes sense. There are likely some writers at the Times looking at Matt Yglesias and others generating close to a million in annual revenue and thinking: I want some of that. Money changes everything, and the amount of money newsletters are generating tells me that we are going to be talking about them for some time.

US : I am glad of two things in the United States. One, we no longer have to hear about the last president any more. (Although some writers still can’t give him up: he’s like an addiction they can’t quit). Two, they have a president who seems to be in a hurry. Awhile ago Vox argued Joe Biden should do everything at once. It looks like he has decided to do that. Besides Vox, two good pieces on Biden that helped me understand him better were this, Bidenomics, explained – Noahpinion,  and this, the radicalism of Joe Biden.

Other interesting things: I am looking to purge my basement and other rooms of things, so I found this piece on how to let go of any possession good. Post-pandemic, we are all likely going to want to live with less.

In the next few decades, I predict many brutalist buildings will be destroyed. Once I may have cheered this, but I have come around to appreciating them more. Articles like this helped.

Poor Orlando Bloom. He gave an interview on what his day in Los Angeles looked like and was widely mocked and ridiculed for it. I had to laugh as well. Then I came across this piece: California dreamin’ with Orlando Bloom, and other tales of only-in-L.A. obliviousness. It helps explain Mr. Bloom and L.A. in general. Worth reading!

Libertarians have been taking a beating during this pandemic. Understandably. Still, they make a good case for why libertarian principles are still useful during this time here.

Finally: I came across this site which I love: All the Restaurants in New York. It reminded me of the work of the late great Jason Polan, and his attempt to draw every person in New York. This gives me a chance to share some links I have of the beloved artist, including this piece in the New Yorker about his Taco Bell Drawing Club. The New York Times also has a piece on it. Finally here are two other sites showing their appreciation for him: ghostly.com and 20×200.com 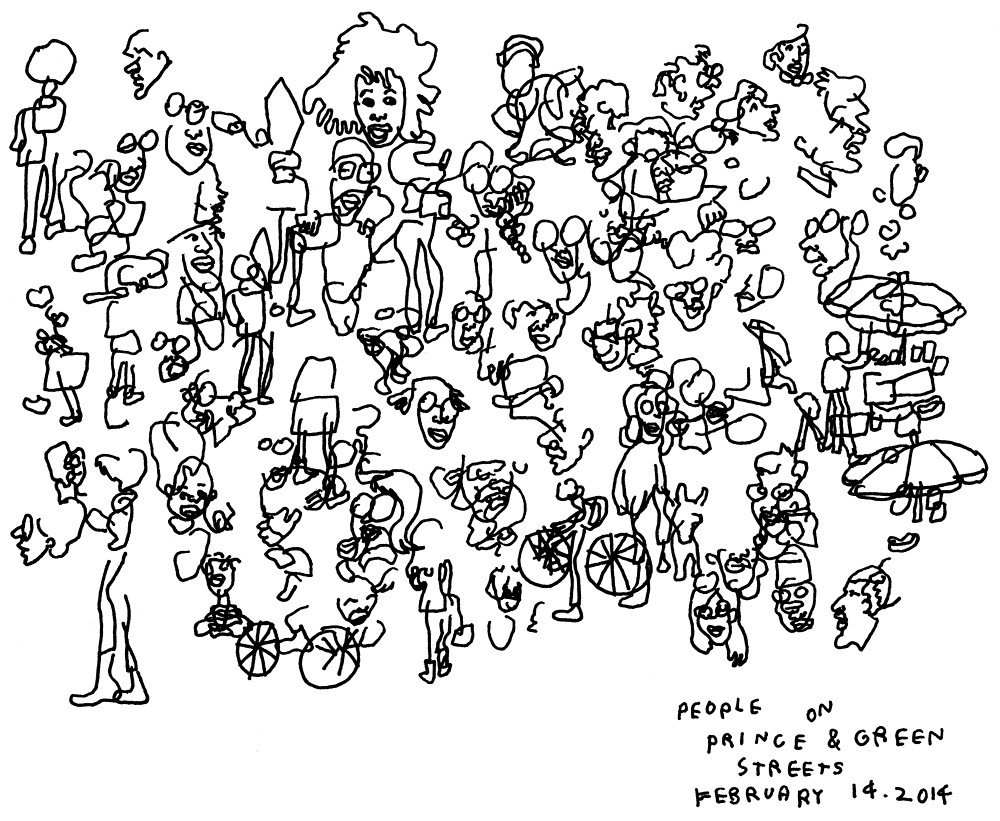 May we all get through this pandemic soon and gather in large crowds again and be with everyone in New York and every place else as well. RIP, Jason. (Image via the NYT’s piece).