Posted on March 23, 2017 | Comments Off on Why the stock market goes down and why it goes up (and what you should consider)

Since the start of the great recession in 2009, two things have happened in the stock market:

This leads me to two conclusions

Why aren’t people responding to your email?!

Posted on March 20, 2017 | Comments Off on Why aren’t people responding to your email?!

The New Yorker has the answer: Sorry for the Delayed Response – The New Yorker. (I think it is meant to be humourous, but it’s a little too close to reality to make me wonder. :))

Comments Off on Why aren’t people responding to your email?!

Reboot your fitness routine with these four links

Posted on March 19, 2017 | Comments Off on Reboot your fitness routine with these four links

If you looking to reboot your fitness routine, these four links could help.

Comments Off on Reboot your fitness routine with these four links

If Ruth Bader Ginsburg can workout like this, so can you

Posted on March 19, 2017 | Comments Off on If Ruth Bader Ginsburg can workout like this, so can you

An interesting article: Ben Schreckinger from Politico Did Ruth Bader Ginsburg’s Workout. It Nearly Broke Him. If you want to see what the 80+ year old judge does to keep in shape, or be inspired to keep in shape yourself, I’d recommend reading it.

It can get too easy to forgo exercising when you get older. One reason people stop is because they think they are too old and cannot do it. Or if they do exercise, they will harm themselves.  Her trainer cautions against that, and says:

Good advice. Maybe your fitness routine is long walks. Or cycling. Or yoga. Or benchpressing hundreds of pounds. Whatever you do, do something. And read the article. I hope it will  inspire you to get fit. Whatever your age.

(Image linked to on Wikipedia)

Comments Off on If Ruth Bader Ginsburg can workout like this, so can you

Is everything political? What is wrong about thinking that way?

Posted on March 16, 2017 | Comments Off on Is everything political? What is wrong about thinking that way?

I was thinking this when reading this quote from Orwell: “The opinion that art should have nothing to do with politics is itself a political attitude.” The idea, implied by this quote, is that everything is political. This idea springs like a trap on people who want to escape from politics and focus on other areas of human concern, like arts or sports or science.

Is this trap avoidable? There is an argument, found here, Only a Game: The Activist’s Argument (Everything is Political), that says that saying “everything is political” renders it meaningless. It’s worthwhile reading the piece, but I don’t think the argument that the statement is meaningless holds true.

Instead, I would first accept it and I would expand the notion of “everything is political” to say that

Now take the above list and change it to read this way:

For some political activists, the phrases “everything is political” and “everything is only or mainly political” are practically the same. Likewise for scientists, artists, philosophers, etc. For me, and for many people, I think “everything is only or mainly” is a relatively weak notion. For example, if a crowd is watching a film, they may watch it through any or all of these lens, or none of them. If asked later if the film she made is mainly political, the director may agree that there is a political aspect to it, but the main themes and elements of the film could be religious and aesthetic or scientific. The film may have something to do with politics, but to see it only as or mainly as political is to miss out on the other aspects of the film.

What is true of a film is also true of our lives. Our lives, and the things that matter to us in our lives, can be seen through a political lens, and a religious lens, and many other lens we may pick up. However such lens provided a limited view. It is better to look at our lives and the lives of others as broadly as possible. We will see more that way. We will hopefully understand ourselves better. And we will acquire a view and a wisdom that those stuck to peering only through lens will never achieve.

(Image is not of Orwell but Albert Camus, which I felt to be more appropriate. Photograph by UPI –  image  from the United States Library of Congress‘s Prints and Photographs division under the digital ID cph.3c08028.
http://www.loc.gov/pictures/item/93507512/ and Wikipedia)

Comments Off on Is everything political? What is wrong about thinking that way?

Is the FED broken? Some random thoughts.

Is the FED  (Federal Reserve System) broken? If not broken then certainly being strongly tested, as this piece shows to me: The Fed Is Searching for a New Framework. New Minutes Show It Doesn’t Have One Yet. – The New York Times.

Since the start of the Great Recession, the target interest rate has gone from just over 5% to just over 0% and has more or less stayed that way for over half a decade. (See the chart). After a very long pause, the chairwoman of the Federal Reserve has begun the process of raising interest rates,  a process that her predecessors have engaged in over recent decades as they put their own distinctive stamp on the economy. (See A History of Fed Leaders and Interest Rates – The New York Times). Some of them, like Paul Volcker, have been hugely successful in shaping the economy. Others, like Alan Greenspan, also have shaped the economy hugely, but I would add, unsuccessfully. So what should the FED do?

Paul Krugman has his take, here. Perhaps an extreme inflation target is the answer, just like Volcker’s extreme interest rates were the answer for their time. However, I don’t think they are symmetrical, and the goals of a higher inflation target would be dampened down by other forces. Furthermore, the FED and most other central banks seem only capable dealing with tamping down inflation and not so capable when dealing with unemployment.

Comments Off on Is the FED broken? Some random thoughts.

Posted on March 14, 2017 | Comments Off on Something beautiful: Italo Calvino’s ‘Invisible Cities’, Illustrated

Artist Karina Puente is illustrating  Italo Calvino’s ‘Invisible Cities’ and the web site ArchDaily has a sample of some of her work, including the image you see above.

I hadn’t expected to like illustrations of this book. The writing itself is so evocative, I would have thought that illustration would limit it.  I make an exception for these works: they complement rather than reduce the writing.

I’d love to see an edition of Invisible Cities filled with Puente’s illustrations. For now, we can enjoy what we see at Archdaily.com.

Comments Off on Something beautiful: Italo Calvino’s ‘Invisible Cities’, Illustrated

On entrepreneurism and ageism

Posted on March 14, 2017 | Comments Off on On entrepreneurism and ageism 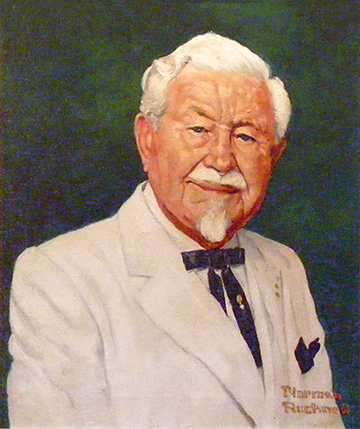 Should you become an entrepreneur if you are older? If you are an entrepreneur, should you hire older workers despite worrying they won’t be a good fit? This piece, Don’t Let Your ‘Senior Citizen’ Status Kill Your Entrepreneurial Spirit, makes the case that the answer to both questions is yes. Well worth reading if you have been asking yourself these questions.

And why is Colonel Sanders shown here? The article will explain.

(Image linked to is on Wikimedia)

Comments Off on On entrepreneurism and ageism

The legendary Canadian runner Ed Whitlock has died. (Source: Masters Marathon Legend Ed Whitlock Dies at 86 | Runner’s World). There are so many things to say about Ed, but the article in Runner’s World gives you a sense of just how amazing he was. From his simple running routine to the records he broke, he was a great and unique individual. R.I.P., Ed.

(Photo: linked to in article, by K.C. Armstrong)

Comments Off on The legendary runner Ed Whitlock Dies at 86

On the superior virtue of the oppressed

Posted on March 2, 2017 | Comments Off on On the superior virtue of the oppressed

Unlike other essays in this collection, Unpopular Essays by Bertrand Russell (Google Books), “The Superior Virtue of the Oppressed” continues to be relevant today. It made a big impression on me when I read it, and I recommend it to anyone who has not read it.

You can read pieces by progressive writers still and find examples of this form of thinking. In some cases, oppressed groups do demonstrate exceptionally virtuous behavior in the face of adversity. My belief is they would rather be treated equally, fairly, and justly, and be free to go about their own business without having to take on the difficulty of pushing back on oppression. And rather than assign them a morally superior role, people in a position to break down that oppression should do so without elevating or denigrating them. (In other words, treating them equally).

Read the essay. Then read more of Russell. Regardless of your thoughts on his arguments, he is a good read for many different reasons, not the least being that he is a fine example of what philosophical writing can be: clear, concise, thoughtful, and accessible.

Comments Off on On the superior virtue of the oppressed

New recipe and food links. Because we all need more of that. :)

I clearly collect too many food links. 🙂 These are some of the better ones I have found and think worth sharing.

Image from: Slow Cooker Bread Recipe | Baked by an Introvert

Comments Off on New recipe and food links. Because we all need more of that. :)