How to tell who the next president of the US will be (ahem, Hillary Clinton)

There’s two ways to tell who will be the next president of the United States.

In this case, at this moment, they are both in agreement: Hillary Clinton will be the next president of the United States. Now, the election is so very far away, anything can happen, a week is a long time in politics, blah blah blah, but right now it is hers to lose.

If you ask me, ignore the pundits and follow the betters: the latter are rarely wrong. Read the pundits if you want to know why she is winning.

The history of a great collaboration: Philippe Starck, Ian Schrager and the rise of the NYC designer hotel

Posted on October 26, 2015 | Comments Off on The history of a great collaboration: Philippe Starck, Ian Schrager and the rise of the NYC designer hotel

It seems commonplace now, but the idea of hotels having the same cachet as a nightclub seem to me to come about in the 1980s with the rise of Ian Schrager as a hotelier. While he collaborated with others, the partnership he formed with Philippe Starck resulted in some really fantastic hotels, as can be seen in this post: The 21st Century Interior – Case studies – Philippe Starck/Ian Schrager: Designer Hotels – Blog – APID.

Nowadays many of these hotels have changed, but in the latter part of the 20th century they were opening with all the excitement of a new nightclub, which in some ways they resembled.  I remember hanging out in the lobby of The Royalton as it was just getting ready to open, talking to the staff in their Hugo Boss suits, marvelling over the designs of Starck, thinking of how the blue carpet made one feel as glamorous as anyone in the city. Later on I stayed at the Paramount and Morgan’s, each visit made Manhattan that much better.

Recently the hotels have been changing as they have been upgraded. Only The Hudson seems to have retained that earlier quality, it seems. Soon even that will transform into whatever brings in the guests. I haven’t been to The Hudson yet: I must get their before it is too late.

I am not sure if there is a history of great hotels, but if there ever is, I expect some of these places will find their place in it. Meanwhile, read the post on these hotels, and check out The Hudson in NYC while you can.

(Top photo of the Royalton, bedroom photo from the Paramount. Both linked to from the post, which has more great photos.)

Comments Off on The history of a great collaboration: Philippe Starck, Ian Schrager and the rise of the NYC designer hotel

For the curious: top chefs and their fridges.

Posted on October 26, 2015 | Comments Off on For the curious: top chefs and their fridges.

You might be surprised (or you might not) to see that much of what top chefs have in their fridges is not all that different than you. If you are skeptical, you should check out this book: Inside Chefs’ Fridges, Europe. Top chefs open their home refrigerators. from TASCHEN Books. If anything, your North American fridge may have alot more in it than the typical smaller European icebox.

The book is worth a look: besides the peek inside, their is also recipes and other things of interest.

Comments Off on For the curious: top chefs and their fridges.

A quick reminder of the path to success 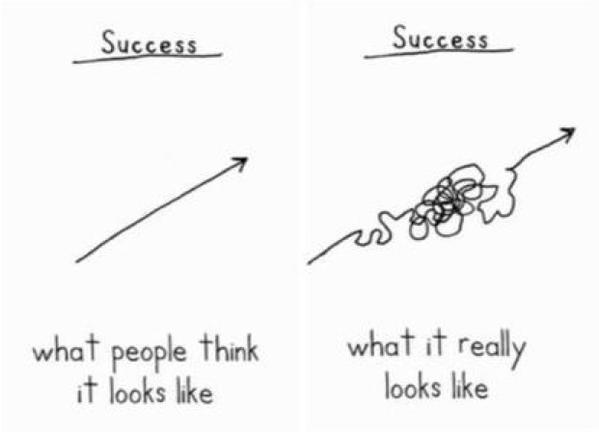 I’ve seen the squiggly versus straight line path to success in many places. It’s a great concept, and a handy reminder to keep close when things seem in a muddle and you wonder if you will ever progress. It’s also a good reminder to keep a log of your progress. A log will remind you that you are succeed, despite those bewildering times when things seem like you are getting nowhere fast.

If you are interested in books and ebooks in particular, you should read this: On the declining ebook reading experience. Two beliefs I have on this topic: