February pandemic highlights and ramblings (a newsletter, in blog form)

Posted on February 28, 2021 | Comments Off on February pandemic highlights and ramblings (a newsletter, in blog form)

Hi there! Thanks for taking the time to read my latest  not-a-newsletter of highlights and ramblings since the one in January. (Well, it was off January, but it was out in February because of a slow start).

Pandemic: It’s been a year now since I last started writing these newsletters at beginning of the pandemic. Last February I was still going to restaurants, still going to gym, still socializing with people and working in an office. No doubt you were doing that too.

I was going over links from earlier in the pandemic, and it was interesting to see how things evolved. When the pandemic first hit, people were recommending we read The Plague, by Albert Camus to get a sense of reference. That’s something we no longer need after a year. (Still a great book, though read it for other reasons). Back at the end of last March, some were asking if the measures taken were worst than the disease. I doubt anyone is asking that now. A big thing back then was making sure you washed your hands thoroughly.Some hackers even proposed a DIY Hand Washing Timer. Now we wear double masks. In the fall, someone wrote that it was fine the virus was mutating. That’s no longer true.

We in Canada and other rich countries are now at the beginning of the end (I hope). I am keeping an eye on Ontario’s latest vaccine update and will go when the time is right. Meanwhile we have to get through it somehow, even if this winter is going to seem hard. I wish I had the gumption to
walk 20,000 Steps a Day like this person: some days I barely do 1000. I watch the case counts go up and down. I don’t think anyone knows why. I’ve lost faith in many Canadian leaders, especially when they do things like this or this. Mostly the premiers are trying to get to the finish line somehow, so they keep doing this because the alternative is too expensive, I feel. Even cooking has been affected by the pandemic, with butter no longer being as good as it used to be. Ah well, I need to lose The the ‘Quarantine 15’ anyway.

One silver lining is that the flu seems to have been all but wiped out this year, according to this. I hope that becomes an annual thing after the pandemic is over.

Things I used to write about: I used to ramble often on the U.S., newsletters and restaurants. I no longer feel the need to so. The Biden administration is more than competent, and it’s almost like Trump no longer was president. The sooner he fades away, the better. Restaurants have not faded away, but they have definitely faded. Happily most are hanging in. I remain cautiously optimistic. Newsletters have done anything but fade: they are bigger than ever.

New things: Clubhouse seems to be the next new social media thing. If you haven’t received an invite, chances soon you will. Like podcasts, Tiktok and other new social media, there will be a rush to it at first, and there will be some people who suddenly become famous as a result. It looks promising, and it likely will be a big new platform. At least as long as the pandemic is underway. One thing to point out, though, is there are concerns with how secure and private it is. Keep that in mind.

Another new thing I like that isn’t new at all: Jacques Pepin. I love watching his videos on Instagram. He’s on YouTube too. Here he is making an egg. I have more to write on him in the days ahead.

Fun things: for a hot minute after the Inauguration there were all these memes of Bernie Sanders dressed up with mittens and placed in all these unlikely settings. Someone even wrote a bit of software to let you do it yourself! You can find it here.

Instagram and Facebook: I deleted my Facebook account years ago, after my Dad died. I didn’t like Facebook the company: they have been an abuser of people privacy since the early days, and they continue to be morally shoddy. Once both my parents were gone, I no longer felt the need to be on that platform in any way.

Meanwhile I’ve been trying to pretend Instagram is different, even though Facebook owns them. Based on how the service is changing and becoming more and more like its owner, I am having a hard time keeping up the illusion.

I am still hesitant to delete my Instagram account. I like the people who post on there, and I’d miss them if I left. I am still there, but I archived my posts from almost a decade. It took a long time, to be honest; that may be a design feature of Instagram. It may be easier to delete your account.

If you do want to delete your account, here’s a piece on how you can backup your photos first.

Good things: finally here’s some good things I’ve read about recently, including this story about a guy who goes on walks and picks up garbage. Here’s some coffee scented candles to pick up your day. If you are feeling like you need to have a good moment right now, read this.

Until the next newsletter, let’s keep each other safe by doing what this illustration says. 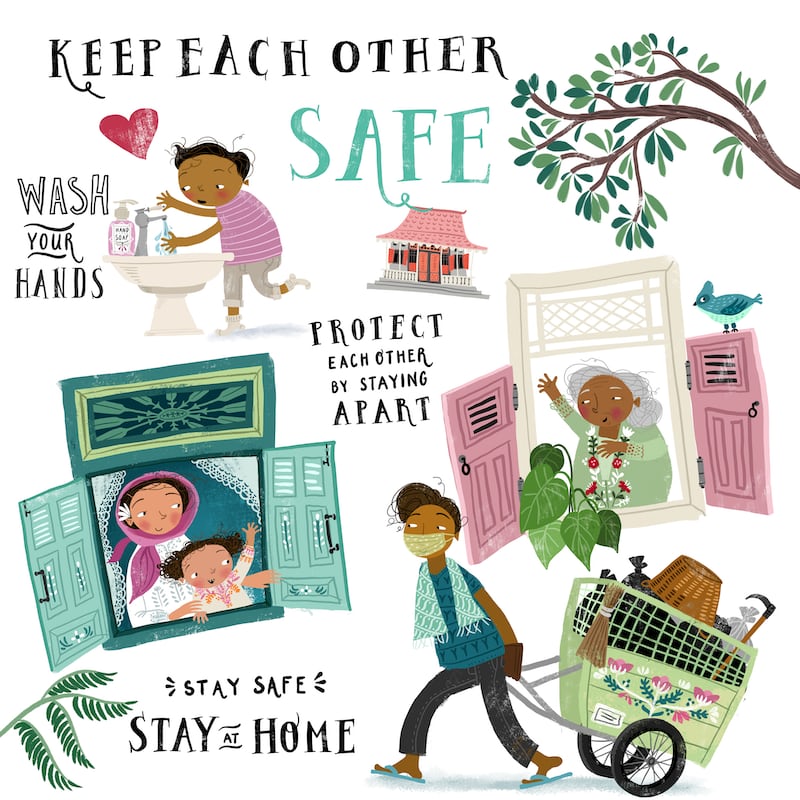 This entry was posted in blog, blogging and tagged 2021, February, newsletter, pandemic, ramblings. Bookmark the permalink.