The Santa Claus parade returns to TO this weekend!

Posted on November 18, 2022 | Comments Off on The Santa Claus parade returns to TO this weekend! 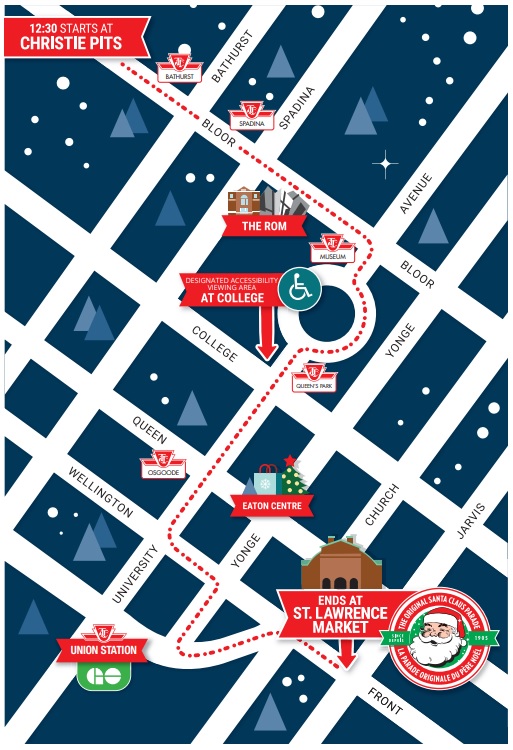 What are you plans this weekend? As for me, I think anything I do outdoors will involve warm clothing because the weather is getting colder. And while I won’t be attending this year, I will be thinking of all the parents and their kids who will be bundling up to go downtown this Sunday and attend the Santa Claus parade! It has been on hold due to the pandemic, but now it’s back! Yay!

I love the Santa Claus parade. When I was a kid, I always wished I could attend. In my 20s I remember seeing it in person for the first time and being a little kid again as the floats and bands went by. And then I got to take my own kids. Some of my best parenting memories are with them at the event. It’s one of those  things that makes Toronto great.

(I also use the Santa Claus parade as a reminder than Christmas is coming soon and it’s time to get planning! Perhaps this will be a good reminder to you.)

If you are thinking of going, here’s the official site for the parade. (Map above is from the site.) Have fun!

P.S. Here’s some tips I found to having a success Santa Claus parade:

When I would take my kids, we would go stand to Bloor and Avenue Road. There is lots of space around that area, so there’s a chance you can see the parade. As well, it is near two subway stops (Museum and Bay), which makes it easy to get to and easy to leave if you take transit. Finally, the parade has to turn there which gives you lots of ways to enjoy the view.

Instead of hoping right on the subway, I would find a place to get a coffee / hot chocolate. (There used to be lots of Starbucks and other coffee shops all around Bloor and Cumberland.) My kids loved this ritual, as did I. Just as good too was the fact that it was easier to get on the subway after your drinks since the crowds had dissipated by then.

If it is going to be cold, bring hot pockets or things to warm you up. You might be ok when you first get there, but after standing around for hours, you will get very cold. Be prepared.