It’s Hallowe’en. Here’s my pandemic highlights and ramblings for October, 2021(a newsletter, in blog form)

Posted on October 31, 2021 | Comments Off on It’s Hallowe’en. Here’s my pandemic highlights and ramblings for October, 2021(a newsletter, in blog form)

Happy Hallowe’en to you. For those celebrating, I hope the weather is good and the night is sufficiently scary and enjoyable. Here’s my monthly newsletter and ramblings as the year passes the three quarter mark. Grab some candy and dig in.

Pandemic: the pandemic is not new and not as scary as it used to be, but it is still bad enough and still not done. Alas. Publications like Vox are wondering what the winter will bring, Covid wise. So far we have seen a decline in cases, but not near enough to zero. Even places like New Zealand have had to abandon their Zero-Covid ambitions. As I have said before, the pandemic humbles us all. If you run restaurants, this has been especially true. Ask Toronto celebrity chef Mark McEwan, whose restaurant and gourmet foods business filed for creditor protection, citing a cash crunch. Or the poor IT people from Ontario whose website to download Ontario vaccine QR code crashed on first day it’s open to all residents. The pandemic has been challenging no matter what you do or where you are.

It doesn’t help that if anything the virus may be mutating into new variants of concern, as this shows:  3 takeaways from the emergence of the Delta Plus coronavirus variant. Yikes. That hasn’t stopped people from yearning to go back to the office, though it seems employers are not communicating post-pandemic workplace plans. I am not surprised: COVID-19 makes it hard to plan anything. For example, some places are wondering how to deal with  the Great Resignation, although there is talk that the notion is over blown. Certainly you would think so if you read this: A worker in Florida applied to 60 entry-level jobs in September and got one interview. Sooner than later we will go back to the office. Some of you even missed the commute. If you have, then read this: The Myth of the Productive Commute.

As for me, I’ve been working with a great team on  Alberta’s Vaccine Passport rollout. I am happy to have contributed in a small but positive way to ending this pandemic.

Non pandemic: there has been much happening that has nothing to do with the pandemic. For example:

Facebook has been in the news much of late. Mark Zuckerberg has tried to shift the conversation to the new name and vision for his company. This piece talks a little about Meta, Facebook’s new name. I can’t help but think it’s a Second Life clone (Third Life?). Whatever you think of Meta, I think Vice sums up the venture nicely for me: Zuckerberg Announces Fantasy World Where Facebook Is Not a Horrible Company. And what is Mark Z and his team trying to get you to not think about? This: The Key takeaways from the Facebook Papers.

I don’t know what will happen to Facebook-the-company. I have long suspected Facebook-the-service has been in decline in all sorts of ways for years. Generally, we have long realized that much of social media is not good for us. Some people have likened it to smoking. I think this may be a better comparison: Social Media Has the Same Downsides As Alcohol – The Atlantic

Climate-wise, the 2021 United Nations Climate Change Conference is starting today. What will come from it, I can’t say. We will know in the middle of November. Recently I have been somewhat cheered up by this piece that argues that yes there is progress but no it is not enough. A fair assessment. It’s not that there are not Climate change solutions, it’s that we can’t deploy them fast enough. My belief is that things will accelerate in this regard and we will get much further faster than many now think. That said, much will be lost and damaged in the meantime. I am cautiously hopeful though not naive.

China has much to say about climate change, and  Xi from China will be there at the climate conference, but how influential he will be remains to be seen. He has been withdrawn lately, as this shows: Xi Hasn’t Left China in 21 Months. Covid May Be Only Part of the Reason. Part of the reason may be that China’s government is starting to screw up. Still, the government has its supporters, such as  the patriotic ‘ziganwu’ bloggers who attack the West. The question I have is what will happen if China’s growth slows significantly? Or if big companies fail?How will Xi’s crackdowns affect Chinese society and his reign? We will see in 2022.

Russia has been in the news of late, and not for the best of reasons. As someone who values a free Internet, the fact that Russia is censoring the Internet with coercion and Black Boxes is a bad thing. There is talk that Russia wants to cut itself off from the Internet. It’s easier said than done if you want to be a successful country. Though they are trying. And the coercion doesn’t stop with Russians. Even American companies like Apple and Google Go Further Than Ever to Appease Russia. Not good.

Gee, Bernie, this version of your newsletter is bleak. What’s good? Well, this is fun: Cats and Domino. I loved this: Essential Irish Slang Everyone Should Know . This was interesting: Beat writers and bohemians: One woman’s memoir of 1950s Greenwich Village. Speaking of NYC, we should go to the Big Apple and visit  the 14 Most Iconic New York City Bars and Restaurants. That would be fun. Not fun, but fascinating is this story: The Medieval-like reformatory for ‚Fallen women on Riverside Drive, New York.

Finally, I would be remiss if I didn’t bring up some NFT lunacy. Here’s the latest gem: Our Lady Peace looks to the future by bundling NFTs with new album . Honestly I could fill my newsletter with this stuff. As for newsletters, it seems Newsletter Writer Fatigue Sets In . Ha! I am not surprised. They need to learn a lesson from Andrew Sullivan, who discovered this ages ago with his blog and ended up hiring staff for what became a publication disguised as a blog. Of course it helps to be pulling in serious money like he does: not many people can do that.

That’s it for another newsletter. Thanks for reading my ramblings! Winter is coming soon: enjoy the Fall while you can. It’s a season of colour and cornucopias. Soak up its wealth and coziness. In no time Winter and Christmas will be here, for worse and for better.

Last word:  I came across this fabulous infographic via this: Wes Anderson Films and Their Actors [OC]. Like Christopher Nolan, he likes to work with specific actors over and over again. 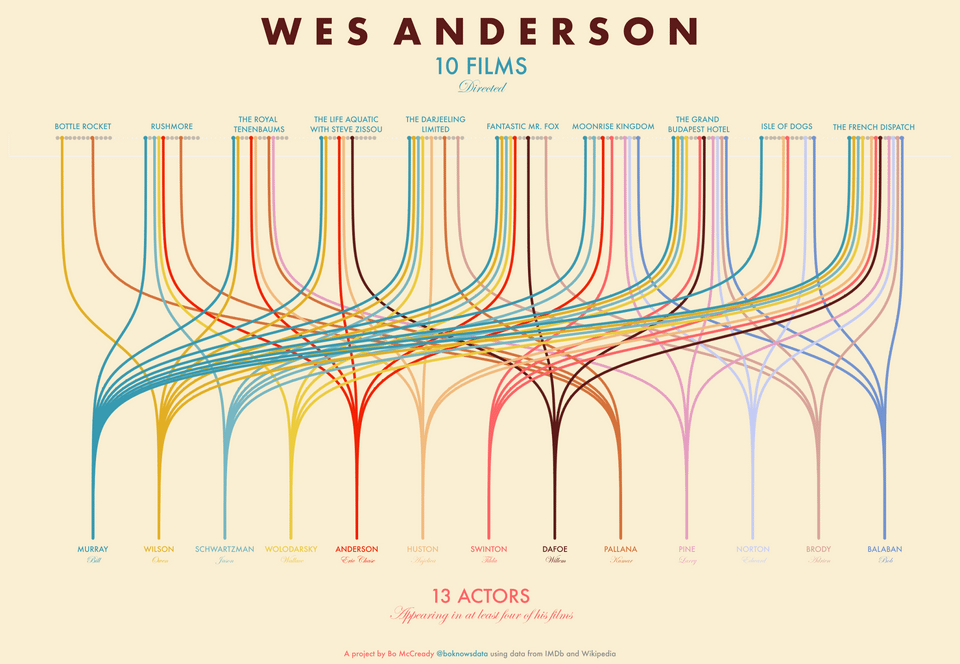 He has a new film out now: The French Dispatch. It looks fun. We could all use some fun! Go and have all the fun you can. Until next month….