The Surprise of Rousseau (be surprising too)

Posted on June 15, 2022 | Comments Off on The Surprise of Rousseau (be surprising too) 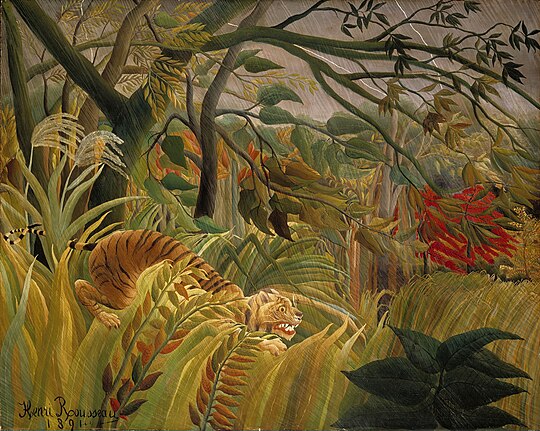 Henri Rousseau is the Great Outsider. An outsider to the Establishment of the Art World, from the Salons to Picasso. Despite rejection and mockery, he persevered and painted and exhibited.

Recently the Guardian featured one of his masterpieces, Tiger in a Tropical Storm (also known as Surprised!). It is seen here. (That National Gallery link provides a nice interface you can use to zoom in and out of.) You can read more about the painting here. I highly recommend you check both of those sites out.

In some way Rousseau surprised his fellow artists. Artists like Picasso were fans but mocked him too. You can read about that here (Le Banquet Rousseau: Picasso and Rousseau’s Friendship) and here (When Henri met Pablo, The Guardian).

Keep Rousseau in mind whenever you are doing something you love with little encouragement and even mockery. You may not be making something great, but you never know. Keep going nonetheless. Surprise them.

This entry was posted in art and tagged art, France, outsider, painting. Bookmark the permalink.