Posted on September 13, 2022 | Comments Off on How the Obama paintings differ (Six or so minor thoughts on the Obama portraits)

The latest pair of portraits of the Obamas were unveiled last week. This pair was hung in the White House, while the others went to the Smithsonian. Looking at them, I thought:

I am still thinking of them. I’ll come back her later if I have any more insights.

Thanks to this piece in Hyperallergic for the images (links) below.

How much would you pay to own the same sneakers that Barack Obama owns?

Posted on February 17, 2021 | Comments Off on How much would you pay to own the same sneakers that Barack Obama owns? 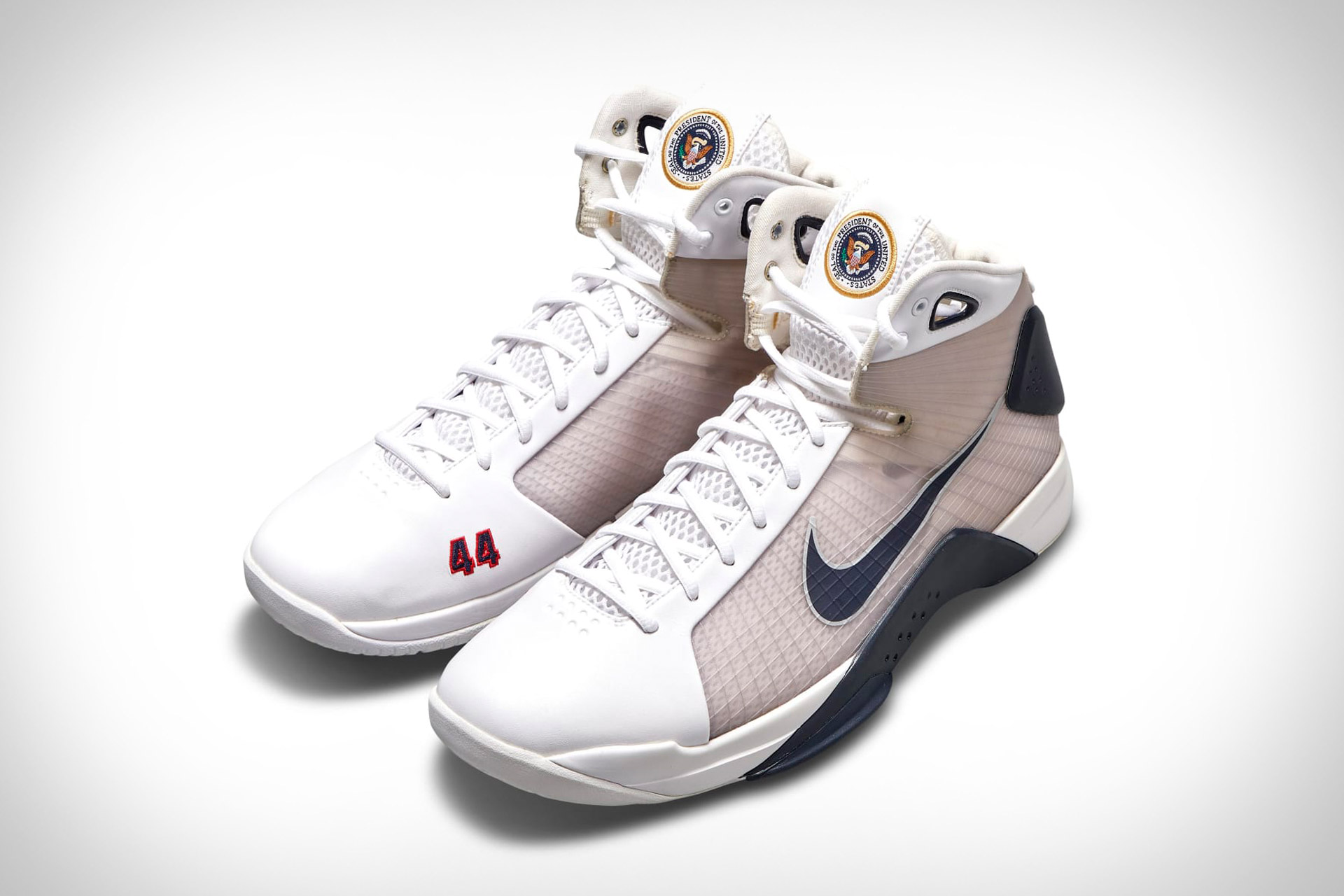 There are only two pairs of these shoes in existence. One pair is owned by Obama.  The other pair can be owned by you, if you can afford them. As this article (Barack Obama’s Nike Hyperdunk PE Sneakers | Uncrate) explains, these Hyperdunk sneakers…

… were designed in 2009 for Obama building off of the Hyperdunk created for Team USA at the 2008 Summer Olympics in Beijing for Nike’s “United We Rise” collection. This customized pair adds the official Presidential Seal on the tongue tag, the number ’44’ by the toe, and insoles with bald eagles, and the date ‘1776’. The size 12.5 hi-tops go up for sale via Sotheby’s Buy Now platform on February 12th.

Comments Off on How much would you pay to own the same sneakers that Barack Obama owns? If you need book recommendations this summer…

Posted on January 24, 2017 | Comments Off on If you need book recommendations this summer…

…then what you need is a good list to go through. Here's one List I highly recommend: Every book Barack Obama recommended during his presidency. There's a wide range of books here, and quite a few to chose from. Regardless of what you pick from it, I think you'll be rewarded with a good read.

Comments Off on If you need book recommendations this summer…

Posted on January 4, 2017 | Comments Off on Eric Holder has a new role – defending California against the Trump Regime

The State of California has a new lawyer to represent it: Eric Holder. The New York Times has the details, here. A good piece, showcasing what we can expect from that State while Trump occupies the White House.

As an aside, I found it fascinating to see how Americans perceived Holder. For a number of Americans, they saw him and his Justice Department as inhibitor of liberty due to how his department cracked down on leaks, among other things. For African Americans, they likely saw him as a provider of liberty, as his DOJ went after those looking to restrict their voting rights.

I think both those activities reflected the wishes of his boss, as well as his own goals.

I think he will be formidable in the next four years as he and his law firm defends the interests of California. It will be interesting, for certain.

Posted on July 15, 2015 | Comments Off on Obama’s moneyball approach to diplomacy

This Vox piece on how Obama does diplomacy is good. While it focuses on Iran, it’s a much broader and more thoughtful analysis of how Obama approaches foreign affairs. Key quote:

Obama’s “undoctrine” starts from the position that there is no need to find a universal foreign policy framework. It’s enough to find specific wins, he believes, and minimize losses.

In his view, foreign policy isn’t a matter of showing strength or trying to make sure that every US action furthers its interests around the entire world. It’s a moneyball approach to foreign affairs: Don’t focus on playing a beautiful game, focus on racking up points at the lowest possible cost. To Obama, that’s how you win.

Obama plays to win, so this shouldn’t surprise people.

Comments Off on Obama’s moneyball approach to diplomacy

This is why we can’t have interesting politicians or politics

Posted on February 11, 2015 | Comments Off on This is why we can’t have interesting politicians or politics

Vox has a good piece on the mistake that Obama recently made (“Randomgate”) and how the resulting follow on stories about that mistake illustrates why we can’t have interesting politicians. Their conclusion?

Long-term, the problem here isn’t just news consumers find themselves listening to bullshit gaffe stories. It’s that politicians learn the same lessons over and over again: unscripted moments are dangerous and generally to be avoided. Don’t give interviews and don’t stray from talking points.

The media will bemoan lack of access and robotic, scripted answers. But it will also punish deviations from the script. And it will do so in the most trivial ways. No minds were changed during Randomgate and nobody learned anything. A couple of spokespeople had a bad afternoon. Some websites (including this one) got some extra pageviews. And every politician learned to be that much more boring in the future.

I think this way of dealing with politicians doesn’t just make them uninteresting: it also make our politics dumber. Here’s hoping this changes, though if anything, I think it will get worse before it gets better.

How the Nobel Peace Prize is Awarded

I don’t think that’s a bad thing. I also think that trying to predict and understand the thinking of the members who make the decision is difficult if not impossible.

That all said, congratulations to Obama. Nice way to end the week!

According this article in GigaOM, Obama Is campaigning within games:

‘Last week we noted unconfirmed sightings of an “Obama for President” billboard in the Xbox 360 racing game Burnout Paradise. Today we’re able to report that it is, in fact, an official advertisement placed by the senator’s campaign team.’