Posted on January 15, 2023 | Comments Off on On the art at Toronto’s Union Station and the people who don’t like it 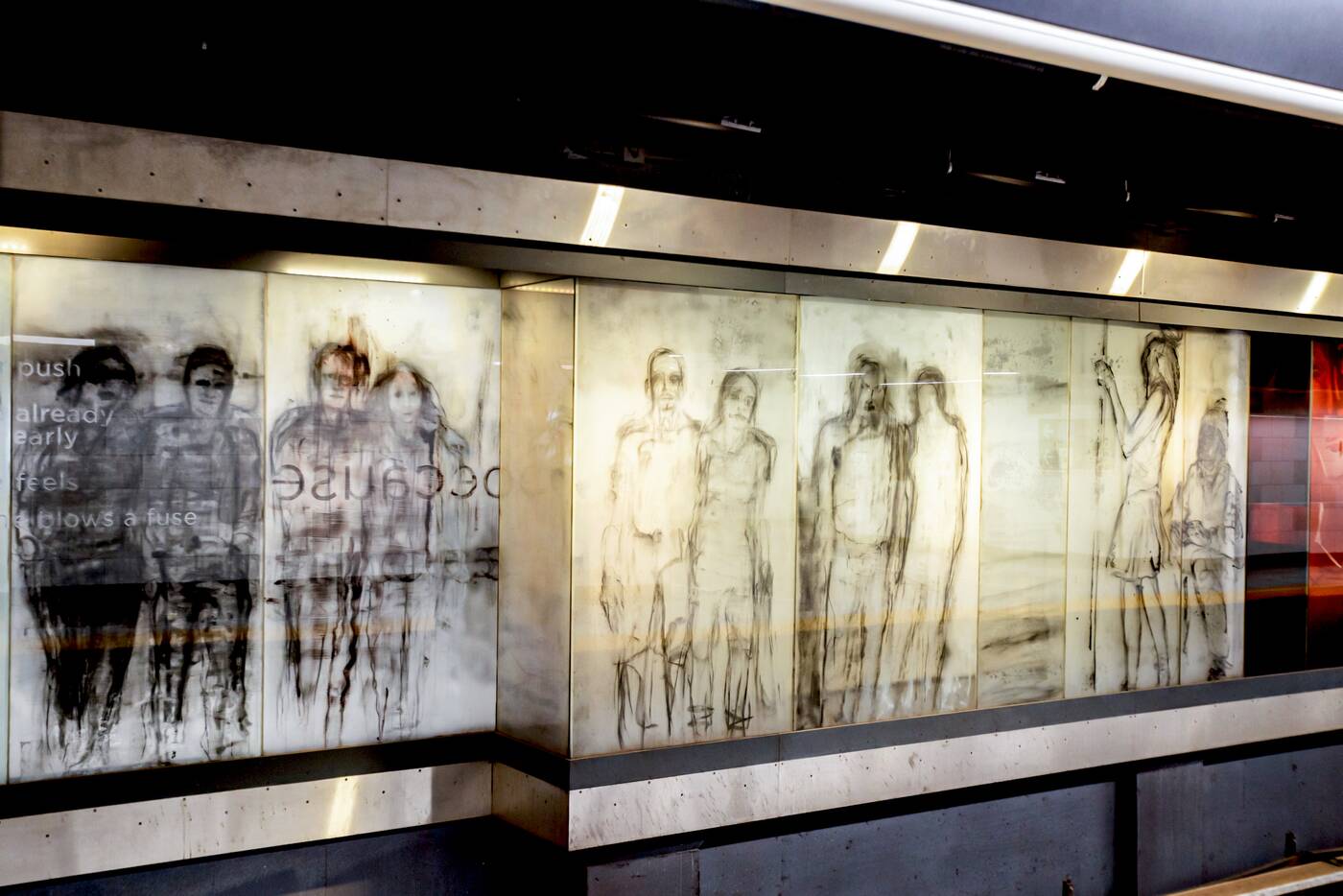 According to BlogTO, there’s some chatter over on…

…a recent Reddit thread that has amassed hundreds of comments, one user wrote, “Union Station has the most depressing, unsettling art. No part of it sparks joy. Will they ever change this?”

I understand why would you would think the work is bad if you think it is trying to spark joy or some positive feeling. If you think that, I’d like to give you a different viewpoint.

My view of the work changed when I started thinking about it in comparison to what I typically see in the subway. What I typically see is…advertising. This work is everything ads are not. Ads promise a better life: this work shows life as it is. Ads are often unrealistic: this work is grounded. Ads are often polished and simple images: this work is rough and complex. To me it is refreshing to see this art in comparison to the overwhelming commercial imagery everywhere else in transit.

Art can spark joy, but it can do much more than that. This work, called Zones of Immersion by Stuart Reid,  may seem depressing to some people. For me it causes reflection and it gives me some perspective of my time underground. And because of that, I think it’s great. I look forward to see it when I’m at Union Station. I hope someday more people feel that way.

The beauty of the TTC’s interiors

Posted on February 4, 2022 | Comments Off on The beauty of the TTC’s interiors 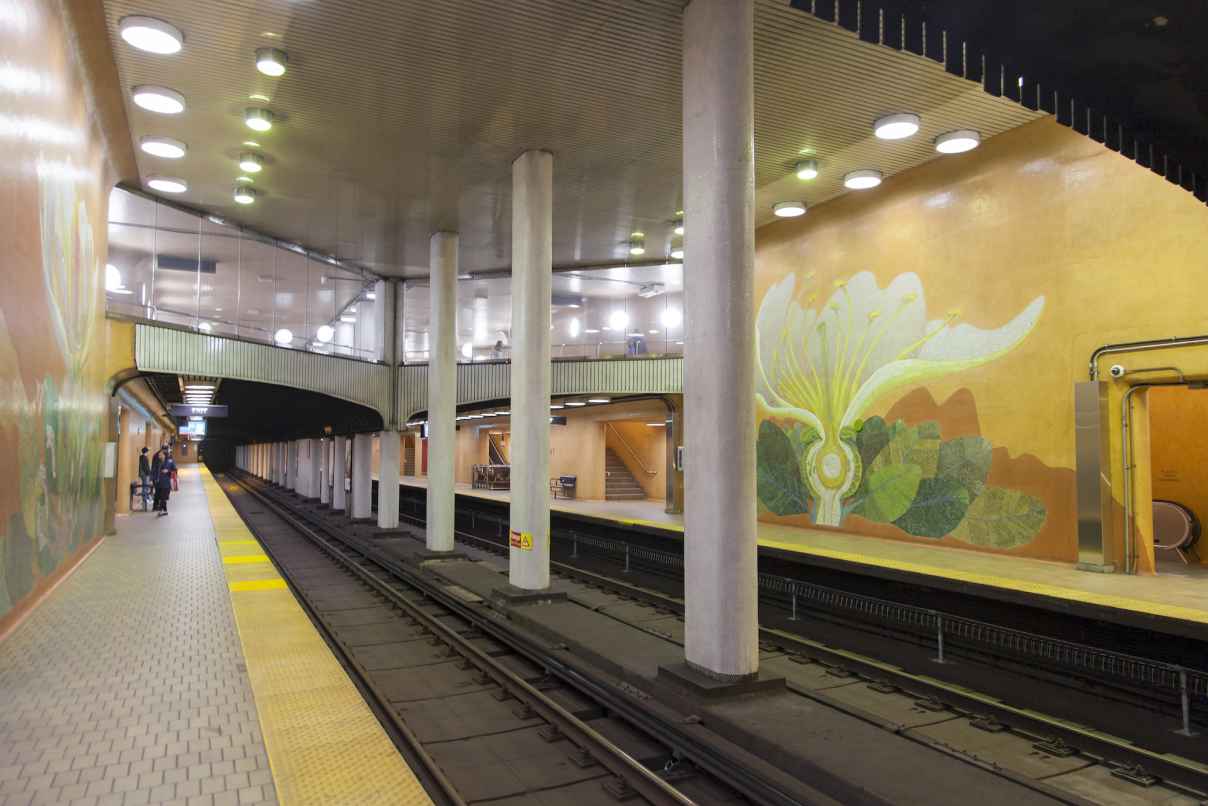 On twitter the other day I had a brief discussion about the good and bad aspects of the TTC’s interiors. This got me thinking, and led me to this site and post on it: juliekinnear.com. I really encourage you to click that link to see a good photoessay on all the beauty of the TTC’s stations. Here are two images from that post, but there are many. The TTC doesn’t have anything like the Oculus in Manhattan, but it has many beautiful spots of it’s own. You can see them in person, or do the next best thing and read that piece by Julie Kinnear. 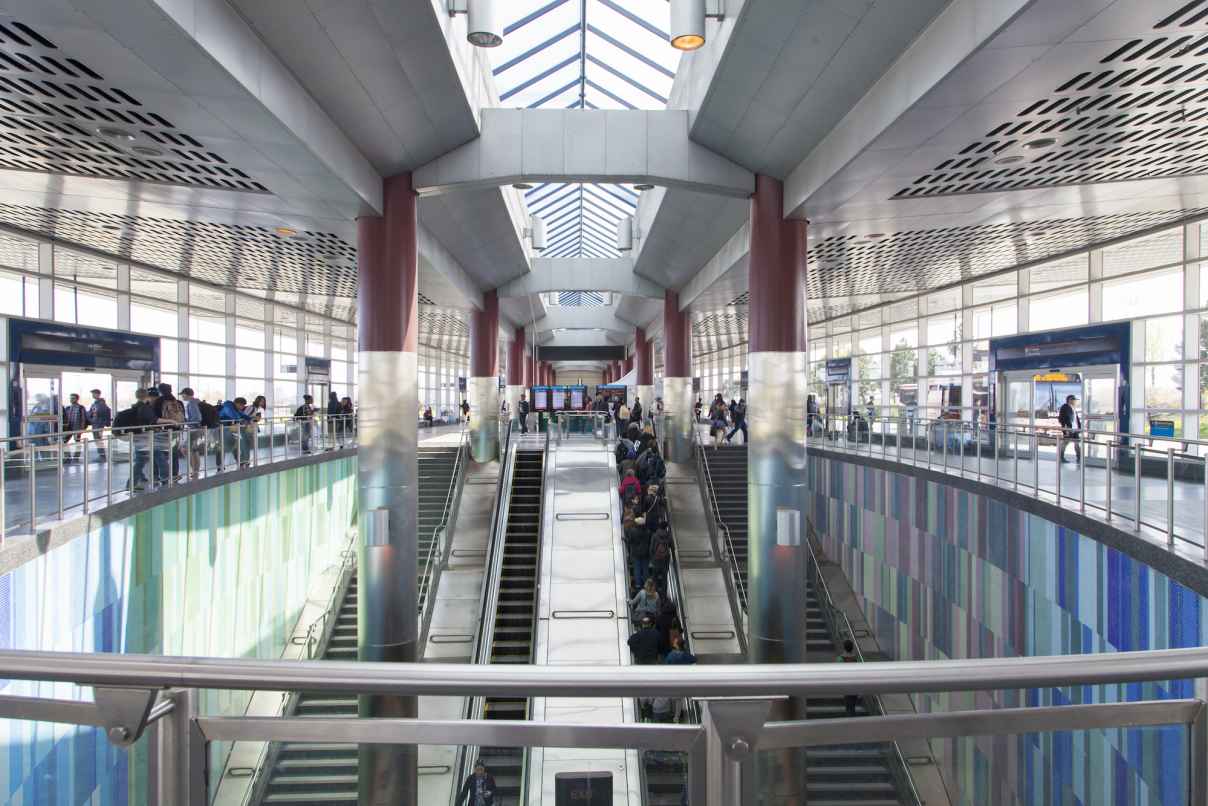 Comments Off on The beauty of the TTC’s interiors

Posted on September 24, 2020 | Comments Off on Want a sneak peak at the new stations being built in Toronto

Then head over here: blogTO. They have a great rundown on each and every stop on the new Crosstown transit line being built along Eglinton Avenue in Toronto. The stop above will be my main one.

There’s still so much more work to be done. Sometimes it feels like it will never finish. But as the article in blogTO shows, it will be, and it will look great.

Is the TTC’s Metropass worth it? Yes. But it depends…

In this otherwise really good piece by Ed Keenan – Six things we learned from John Tory’s transit announcement: Keenan | Toronto Star – he made this comment

At a new price of $141.50, a Metropass costs almost as much as 51 tokens or 47 cash fares. For most weekday commuters, that math doesn’t add up.

At first thought, this seemed right to me. If you only use the Metropass to go to and from one location each business day, it isn’t worth it. For example, assuming most months have 22 working days, then that is 44 tokens, which is less than the 51 tokens it is worth.

Where the Metropass math adds up is when you start to be a heavier use of the TTC.

If you travel on the TTC daily, then you can get in as many as 62 trips/tokens on the TTC and a Metropass will be a good buy for you. Even in February, that is 56 trips/tokens. Daily users easily benefit from it. But if you don’t travel every day on Toronto transit, there are other ways to make the Metropass worthwhile.

For people who use it to go to work and then do after work activities, the Metropass is a good idea.  For example, if you take trips to and from work, as well as using it to go to meet friends or to take after work classes or to go to the gym, then you can benefit from having and using a Metropass. For example, 44 tokens for work plus 3 trips a week to classes plus one to friends adds up to 16 more tokens a month for a total of 60 tokens.

For people who have to stop to pick up their kids from childcare, the Metropass is good value. I used to pick up my son daily after work. That was 3 tokens every day, so most months that was 66 tokens.

For people who can share it, the Metropass is great value. For example, if a couple works different shifts, then together they potentially need 88 tokens each month to get them back and forth to work. Sharing a Metropass could save alot for such a couple.

Even people who don’t use the TTC all that much can still make the Metropass work for them if they can reduce the cost of it. For example, people who can buy the Metropass on subscription can get it for a lesser amount. That means you need to take less trips to break even. And if you pay enough taxes to break be able to claim your Metropasses as a tax expense, then you also need to take less trips to break even with the purchase.

If you take your total transportations costs, including taxis, Zipcars, etc, then you might find that having a Metropass is worth it. For example, you might find you grab a cab a few times each month because you don’t have tokens or cash. Switching to a Metropass, you find you do that less and therefore your overall spending on transportation each month is going down.

Cost aside, the other great benefit of the Metropass is convenience. All the hassle of dealing with buying tokens is gone. That convenience means you may be more likely to use the TTC when you have a Metropass, which leads you to make your money back from getting it. Also, you may find you enjoy yourself more by getting out more. It’s an intangible benefit, but a good one nonetheless.

I think for heavier users of the TTC, the Metropass is definitely worth it. And to be fair to Ed, he acknowledged a number of these points in a discussion he had on twitter.  Whether or not the Metropass is worth it to you will depend on your own use of the TTC and your own math.

P.S. Thanks for reading this. If you have found it useful and you’d like to say thanks by buying me a coffee, you can do so here. Thanks! That’s awesome!

Comments Off on Is the TTC’s Metropass worth it? Yes. But it depends…