When was SNL at it’s best?

The joke is that SNL was at its best the years you watched it as a teen. I have literally been watching it since it started — Yes, I am old — and I kinda agree with that. SNL is really such an uneven thing that even back then there were good and bad parts of the show. (Usually anything after the second musical performance is throwaway). As well, SNL is best as much for individual performers as it is for the entire show. From Catherine McKinnon all the way back to Gilda Radner, there have been individual performers who made a good show great. (My favorite of all time is Bill Murray, but there are too many to mention here).

For another take on it, here is a someone more objective study on when SNL was at its peak. According to this piece in OpenCulture, this YouTuber took a systematic approach to deciding the best of SNL. He…

… decided to withhold judgment on the overall quality curve of Saturday Night Live, his favorite show, before putting in the time and effort to watch at least one episode from every year in its run

The article has a link to his YouTube results. As OpenCulture concludes,

He may not change anyone’s mind about the best, and worst, seasons, episodes, cast members, and hosts. But he does demonstrate an admirable willingness to dig into SNL’s history and give years of comedy positively antiquated by 21st century standards a fair shake.

Comments Off on When was SNL at it’s best?

Before the Kindle, there was Napoleon’s travelling library

Posted on November 21, 2017 | Comments Off on Before the Kindle, there was Napoleon’s travelling library

And what a library! Napoleon had asked for it to be as follows:

The Emperor wishes you to form a traveling library of one thousand volumes in small 12mo and printed in handsome type. It is his Majesty’s intention to have these works printed for his special use, and in order to economize space there is to be no margin to them. They should contain from five hundred to six hundred pages, and be bound in covers as flexible as possible and with spring backs. There should be forty works on religion, forty dramatic works, forty volumes of epic and sixty of other poetry, one hundred novels and sixty volumes of history, the remainder being historical memoirs of every period.

Even with slimmed down books, that is a lot of paper to be carrying around as your conquer Europe and other parts of the world. I’m sure he would have loved the Kindle.

Comments Off on Before the Kindle, there was Napoleon’s travelling library

Posted on October 26, 2017 | Comments Off on How to get started making low cost films using your smart phone 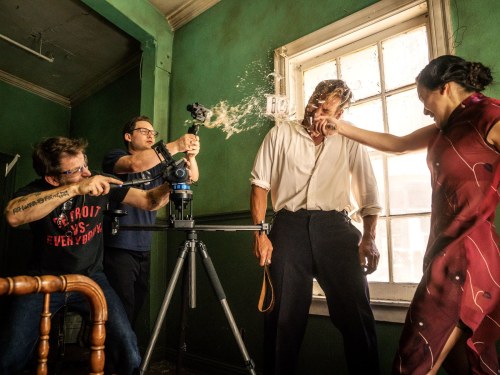 Sure, to make a great film, great equipment helps. But as these links (and that photo of Zach Snyder shows), you can also make a good film using the latest smart phone technology. And not just Snyder: Gondry does it too. All the links below can help you get started making films using the technology in your pocket. Your films may not be as good as those, but the sooner you start making films with what you have on hand, the better your later films will be.

Should you go to (film) school? Some brief thoughts on education

Posted on October 5, 2014 | Comments Off on Should you go to (film) school? Some brief thoughts on education

If you read this Open Culture post, Director Robert Rodriguez Teaches The Basics of Filmmaking in Under 10 Minutes, you’d be inclined to say “no”. As for me, I appreciate the points raised in the piece. Much of directed learning in school is less than valuable. That said, there are many ways to learn: experience, reading and watching how others do things, schools and teachers. The idea of limiting yourself to one way of learning is to deprive yourself unnecessarily. Learn any which way you can.

Comments Off on Should you go to (film) school? Some brief thoughts on education